"Bounding volume hierarchies (BVHs) are an approach for ray intersection acceleration based on primitive subdivision, where the primitives are partitioned into a hierarchy of disjoint sets."

Intersection testing is an important part of the rendering, and thus the acceleration is concerned. Bounding volume hierarchies (BVHs) is a widely used method, which organizes the primitives of a scene with a binary tree. The core concept is that each node of the binary tree stores a bounding box that includes all primitives of the subtree. And therefore, the rendering engine can check the intersection quickly by traveling the tree and check the bounding boxes along the path. To check whether a ray hit a primitive, the engine uses a binary search to find the primitive while testing the intersection with the bounding boxes along the path. If one of the tests fails, then the ray must not hit the primitive we're looking for because the children nodes' volume must be the sub-volume of the parent node. 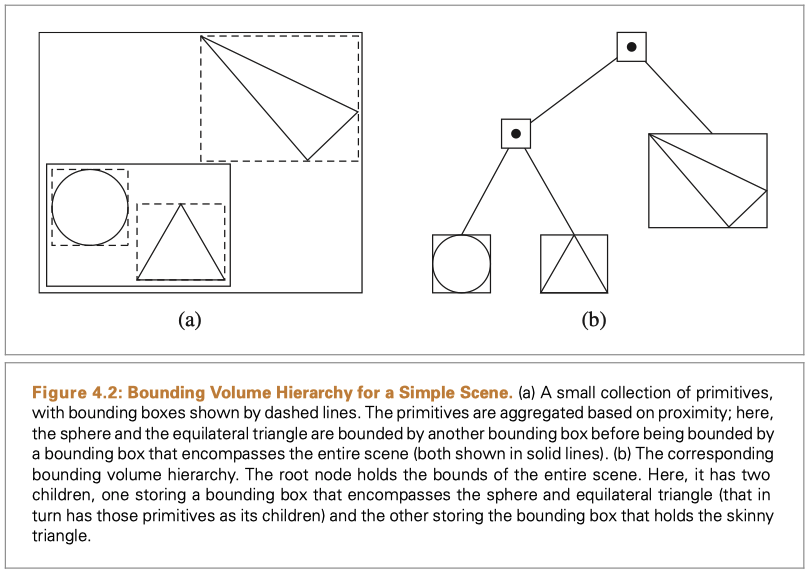 Illustration of the BVHs

(Note: The copyright of some quotes, source code and images in this post belong to PBRT-v3.)

In comparison to spatially subdivision methods like KD-tree, we can estimate the maximum memory cost of BVHs. Because the height of the binary tree is related to the sum of the primitives. As binary BVH stores the primitive in the leaf (as you can see in the illustration above), for an n-primitives scene, the number of nodes is 2n-1. It is composed of n leaves and n-1 inner nodes that hold the bounding box information. In some implementations, a leaf stores more than 1 primitive, and the total nodes number is even smaller in such a situation. On the other hand, BVHs are generally more numerically robust to missed intersections in comparison to spatially division algorithms.

There are three stages to construct a BVH in the implementation of PBRT-v3:

For those who just want to practice BVHs instead of using it in rendering, step 3 will be optional.

The BVHs construction is implemented in

Besides bounding information, some additional information is precomputed and stored in the array to reduce the computing cost in traveling. The declaration above is a local struct in accelerators/bvh.cpp. The meaning of member variables is apparent like the centroid is the "midpoint" of the bounding box.

The initialization code is straight-forward:

The WorldBound() method finally calls the one defined in shape and implemented in corresponding source files. Generally, it computes the bounding box first object coordinate and then applies a transform on it.

With the primitive information array, now we can build the BVH tree via different algorithms. PBRT-v3 implements 4 algorithms, which are defined as:

If the user choose SplitMethod::HLBVH, the engine will call BVHAccel::HLBVHBuild while calling BVHAccel::recursiveBuild for the others. I will introduce the differences between them later. Now let's take a look at the general building pipeline first:

The struct BVHBuildNode is a util class and it is declared as:

It is similar to those node we often define in a binary tree. The only thing to notice I think is the difference operation applied to leaf and interior nodes. And we can see that all nodes of the BVH store a bounds variable to represent the bounding information.

The BVHAccel::recursiveBuild will construct a BVH with the primitives of the vector with index within [start, end). The main idea is:

The main difference comes from the choice of dividing algorithm, there are \(2^n - 2\) ways to partition n primitives into two non-empty groups. In practice when building BVHs, one generally considers partitions along a coordinate axis, meaning that there are about 6n candidate partitions. The implementation in PBRT-v3 chooses the axis associated with the largest extent when projecting the bounding box centroid for the current set of primitives. 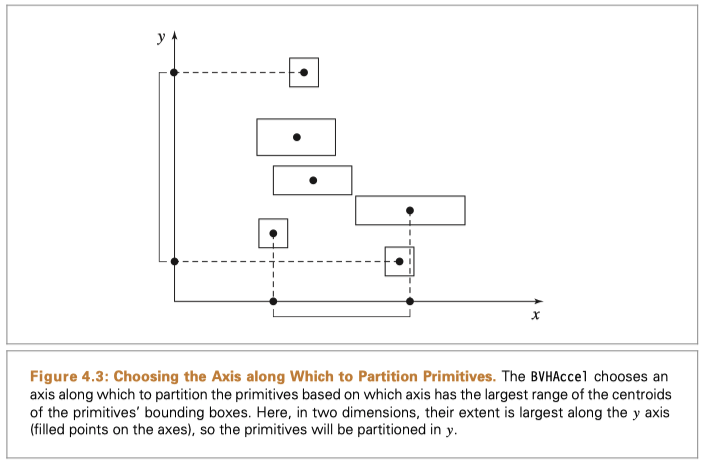 A special case is that all centroid points overlap and thus the centroid bounds have zero volume. In such a case, there is no effective splitting method and therefore just put all the primitives in one single leaf node.

The corresponding source code is here. There is a comment at the beginning of each step, so it should be easy to understand now.

Though SAH gives very good results, it is hard to parallelize, and many passes are taken over the primitives to compute the SAH costs. To address the problem, linear bounding volume hierarchies (LBVHs) were developed. It is much complicated than the methods I mentioned above, and it occupies many pages in the book. So that I plan to separate it to another post in the future to avoid putting too much content in this post. I think the construction methods mentioned above are enough for you to write your BVH, and you can read HLBVH if you want to improve it later.

Now we have a BVH binary tree. Though you can just use the pointer to visit the tree, I'm gonna introduce another way to make the BVH pointerless, which increases the system performance with better use of cache and memory.

Linear Layout of a BVH in Memory

The structure LinearBVHNode is introduced to flatten the tree.

This structure is padded to ensure that it’s 32 bytes large. Doing so ensures that, if the nodes are allocated such that the ﬁrst node is cache-line aligned, then none of the subsequent nodes will straddle cache lines (as long as the cache line size is at least 32 bytes, which is the case on modern CPU architectures).

With the declaration of LinearBVHNode, we can allocate the memory needed at once.

Now let's move on to flattenBVHTree. The function is quite straightforward that the *offset parameter tracks the current offset of the array. The flatten function processes recursively:

Source code is a straightforward implementation of the three steps:

Ok, now we know how to construct and flatten a BVH tree! There's only a question left to use the accelerator: how to test intersect with the BVH we constructed. In another word, how to traversal the binary tree?

Recall what information we assign to each node during construction: split axis, bounds, primitive reference. And then we can start to look at how to test if a ray intersects with any primitives in the BVHs! The BVHAccel should receive a ray as a parameter as well as a pointer to a SurfaceInteraction instance. The intersection testing process can be described as:

The related source code is below. Intersect records the interaction information while IntersectP just simply testing if the ray hit or not. The code of IntersectP is similar that it calls Primitve::IntersectP instead of Primitive::Intersect here.